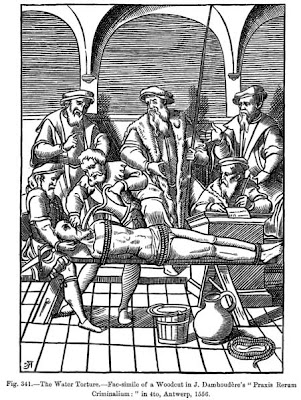 Are Americans Really "Better Than That?"

"A boyish, inquisitive face with an innocent look peered out from the Washington Post's lead story yesterday on torture. It was well groomed, pink-shirted John Kiriakou, a CIA interrogator who could just as easily pass for the local youth minister

The report by the Post's Joby Warrick and Dan Eggen, which describes Kiriakou's experience in interrogating suspected terrorists, raises in an unusually direct way an abiding question: Should the United States of America be using forms of torture dating back to the Spanish Inquisition?........"
Posted by Tony at 8:58 AM