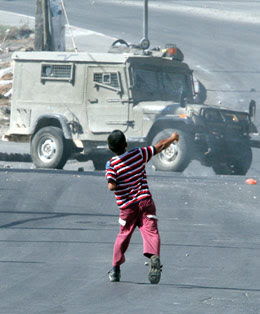 "The first Palestinian intifada (uprising or shaking off) erupted dramatically on 9 December 1987 after twenty long years of brutal Israeli military occupation. The Palestinians had had enough. Not only had they been dispossessed of their homeland and expelled from their homes in 1948 to make way for the boatloads of European Jewish immigrants flooding into Palestine on a promise of a Jewish state, they had been made to suffer the indignities of a people despised and rejected by the whole world. They were the victims of a colonialist project that denied their existence and their rights to self-determination in the land that they had continuously inhabited for millennia so that a state could be created in all of the land exclusively for Jews from anywhere in the world. To this day, the Zionist project has held powerful countries and august institutions hostage in its service, despite the indisputable rulings of international law and United Nations resolutions supporting the rights of the Palestinians. What Israel had not bargained for, though, was the steadfastness of a wronged people and their indomitable spirit that sent the first stones hurtling towards army tanks and bulldozers in their desperate bid to shake off Israel's crushing occupation. So began the "War of the Stones."....."
Posted by Tony at 7:34 PM