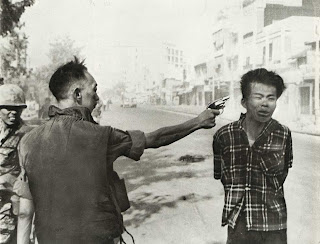 U.S. forces in Iraq soon will be equipped with high-tech equipment that will let them process an Iraqi’s biometric data in minutes and help American soldiers decide whether they should execute the person or not, according to its inventor.

A Chilling Article About Imperial Reach
By Robert Parry

""A war fighter needs to know one of three things: Do I let him go? Keep him? Or shoot him on the spot?” Pentagon weapons designer Anh Duong told the Washington Post for a feature on how this 47-year-old former Vietnamese refugee and mother of four rose to become a top U.S. bomb-maker.....

The labs – collapsible, 20-by-20-foot units each with a generator and a satellite link to a biometric data base in West Virginia – will let U.S. forces cross-check data in the field against information collected previously that can be used to identify insurgents. These labs are expected to be deployed across Iraq in early 2008.

Duong said the next step will be to shrink the lab to the size of a “backpack” so soldiers who encounter a suspect “could find out within minutes” if he’s on a terrorist watch list and should be killed......

In effect, the Bush administration is transforming Iraq into a test tube for modern techniques of repression, which already include use of night-vision optics on drone aircraft, heat resonance imaging, and firepower that is both deadly and precise. The new techniques represent a modernization of tactics used in other counterinsurgencies, such as in Vietnam in the 1960s and in Central America in the 1980s......"
Posted by Tony at 10:46 AM