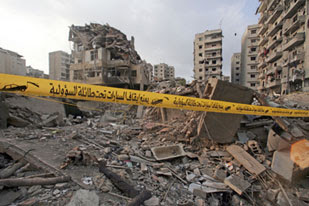 "As political turmoil continues in Lebanon, observers say Hezbollah, the Shia movement, is re-arming and pursuing fresh recruits for its armed wing. Hezbollah has not denied this.

The movement was launched in 1982 in response to Israel's occupation of southern Lebanon. Backed by Iran and supported for much of its history by Syria, its fighters carried out a series of suicide attacks against Israeli soldiers.

By the late 1990s, Hezbollah had developed into a political party and was funding schools, hospitals and social programmes for Lebanon's often impoverished Shia population.

While the movement adapted to Lebanon's political sphere, its armed wing, the Islamic Resistance, continued to attack Israeli forces occupying southern Lebanon until they pulled out on May 25, 2000.

In retaliation, Israel bombarded Lebanon for 34 days in an attempt to destroy Hezbollah.

However, in the aftermath of the war, Hezbollah now enjoys increased popularity, with more fighters signing up.

One such recruit spoke to Al Jazeera on condition of anonymity.

Mohammed, a 22-year-old architecture student, joined after the war. He was following in the footsteps of his brother and father, both resistance fighters....."
Posted by Tony at 5:34 AM