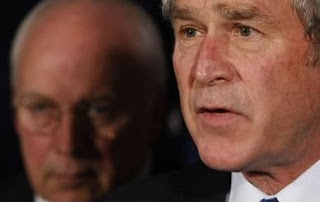 "The reported White House resistance to the National Intelligence Estimate's conclusion that Iran had abandoned a nuclear weapons program in 2003 was an effort to save a political tactic the George W. Bush administration had been using since early 2004, despite the absence of an intelligence analysis to support it......

The key findings of the NIE were never made public – a decision which set that NIE apart from others covering politically sensitive subjects. Keeping them secret gave greater credibility to allegations of a secret enrichment program by Israel's Mossad. Israeli intelligence officials told a number of journalists, including Seymour Hersh of the New Yorker, that there was a second nuclear program in Iran run secretly by the military and the revolutionary guards that included both enrichment and weaponization activities. Israel used the parallel enrichment program charge to support its claim that Iran was much closer to having the capability to make a nuclear weapon than had been suggested by U.S. intelligence.

When work on a new NIE on the Iranian nuclear program began in the second half of 2006, the alleged covert nuclear weapons program was again the top issue.

By November 2006, the Central Intelligence Agency had already circulated an assessment within the intelligence community that rejected the covert weapons program thesis, as Hersh reported in late November. However, Vice President Dick Cheney and his aides were trying to exclude the CIA's assessment from the NIE, a senior intelligence official told Hersh.

The CIA had found no evidence for such a program, but Cheney and the White House were insisting, according to Hersh's story, that the failure to find a secret nuclear weapons program in Iran was merely evidence of the skill with which the Iranians were hiding it.

Another tactic used by Cheney was to cite a new claim by Israeli intelligence that its spies inside Iran had learned that Iran had developed and tested a trigger device for a nuclear bomb. Conveniently, the alleged tests would not leave any trace of radioactivity, thus explaining why the sophisticated radiation monitoring devices placed in Iran by the United States and Israel had not detected it.

The CIA did not regard the report as reliable, especially in the absence of details that would allow verification. But Cheney asked for the original raw Israeli intelligence report, according to Hersh – the same thing Cheney and top Pentagon officials had done in constructing their case for the invasion of Iraq in 2002......"
Posted by Tony at 4:40 AM