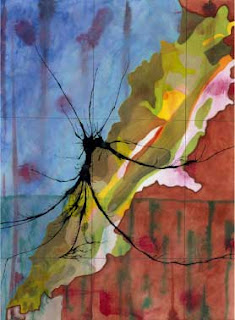 This essay serves as the introduction to Bomb After Bomb: a Violent Cartography, a collection of drawings illustrating the history of bombing by elin o'Hara slavick. o'Hara slavick is a professor of art at the University of North Carolina. More of her visionary work can be viewed on her website. AC / JSC

".....I am stunned by the thought that we, the "civilized" nations, have bombed cities and countrysides and islands for a hundred years. Yet, here in the United States, which is responsible for most of that, the public, as was true of me, does not understand--I mean really understand--what bombs do to people. That failure of imagination, I believe, iscritical to explaining why we still have wars, why we accept bombing as a common accompaniment to our foreign policies, without horror or disgust.

We in this country, unlike people in Europe or Japan or Africa or the Middle East, or the Caribbean, have not had the experience of being bombed. That is why, when the Twin Towers in New York exploded on September 11, there was such shock and disbelief. This turned quickly, under the impact of government propaganda, into a callous approval of bombing Afghanistan, and a failure to see that the corpses of Afghans were the counterparts of those in Manhattan......"
Posted by Tony at 10:20 AM