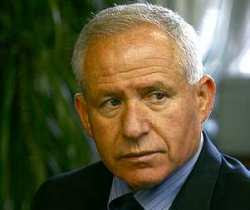 War Criminal Dichter who was recently forced to cancel a trip to Britain to avoid facing war crime charges in court.

".....During a town hall meeting in Holon on Saturday, Dichter called the National Intelligence Estimate an "American misconception concerning Iran's nuclear weapons, which is liable to lead to a regional Yom Kippur [War] where Israel will be among the countries that are threatened.".....

"Something went wrong in the American blueprint for analyzing the severity of the Iranian nuclear threat," Dichter said. "We have to hope that the U.S. will know to correct this. Israel and other states must help in any way including providing intelligence material so as to fix this miscalculation."

"A misconception by the world's leading superpower is not just an internal American occurrence," the former Shin Bet chief said. "This has to cause concern in Israel and many other countries."

Dichter added that the NIE's conclusions are also likely to impact the dynamics of negotiations with the Palestinians.

"The U.S. has been authorized to be the arbiter that determines whether the Palestinians are fulfilling their road map obligations on all matters relating to combating terrorism," the public security minister said. "Those same [intelligence] arms in the U.S. are apt to make a mistake and declare that the Palestinians have fulfilled their commitments, which would carry with it very serious consequences from Israel's vantage point."......"
Posted by Tony at 6:54 AM