Hamas is here to stay 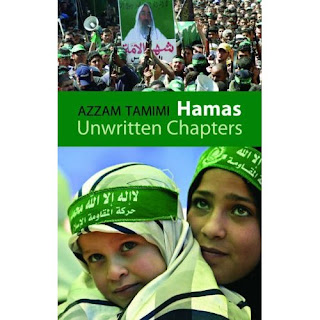 Post-Annapolis, those interested in resolving the conflict have no option but to knock on its door

By Azzam Tamimi
(Dr Azzam Tamimi is the director of the Institute of Islamic Political Thought (IIPT), London. He has been visiting professor at Kyoto University (2004) and Nagoya University (2006). He has published several books, the most recent of which was on Islam and democracy, Rachid Ghannouchi, Democrat within Islamism (Oxford University Press, New York, 2001))
The Guardian

"......The reality is that Annapolis has primarily been about two things; first, maintaining the sanctions against the Gaza Strip and increasing the pressure on Hamas; and second, re-launching the Road Map, which had long been dead and buried.....

Few lessons seem to have been learned by those who devised the policy of sanctions. The US and Israel assume that the sanctions are working and that Hamas is losing support. Policy makers in Washington are clearly guided, or misguided, by wishful thinking and misinformation. There is no evidence whatsoever that Hamas's popularity has dwindled. To the contrary, the people of Gaza blame the crisis more on Abbas than on Hamas. The economy is indeed in bad shape in Gaza. But the strip is safer than ever before. Few people blame Hamas for shortages of food, medicine or fuel but most people are grateful for security, something which most Gazans missed when Abbas's men were in charge. The economic situation is not as bad in the West Bank. Yet, most of its inhabitants feel insecure. Scores of Palestinians are arrested every day by Israel or the PNA while thugs acting with impunity continue to have a free hand in harassing people and abusing them.

The Ramallah government is seen by many Fatah loyalists as a bunch of outsiders. An increasing number of Fatah leaders have recently been more vocal in calling for its replacement. A statement released in Ramallah by Fatah's Al-Aqsa Martyrs Brigades has gone as far as describing Fayyad's administration as a puppet government of Israel and the US.

A recent debacle by the PNA representative at the UN, who is not a Fatah member, urging the General Assembly to adopt a resolution declaring Hamas "an outlawed militia" sent many Fatah supporters wondering who the man was speaking for. There can be nothing more tarnishing to Fatah's image than the project of reform the movement is said to undertake under the supervision of Dennis Ross who is commissioned and funded by the US Congress and who has been visiting the West Bank frequently for this purpose......

Deluded by wishful thinking, the Israelis and the Americans have been wagering on the losing horse. There is only one way out of the current predicament and that is to abandon the policy of turning the PNA into another Lahad entity and seek an understanding with Hamas. The movement should be talked to without preconditions....."
Posted by Tony at 4:43 AM