Israel and the NIE’s Inconvenient Truth 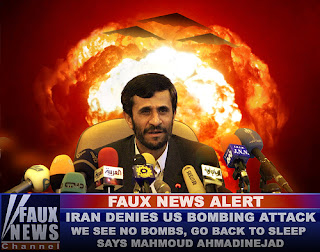 How They Stole The Bomb From Us

"It was like an atom bomb falling on Israel.

The earth shook. Our political and military leaders were all in shock. The headlines screamed with rage.

A real catastrophe: the American intelligence community, comprising 16 different agencies, reached a unanimous verdict: already in 2003, the Iranians terminated their efforts to produce a nuclear bomb, and they have not resumed them since.......

So what to do? One can instruct Israeli diplomats abroad to redouble their efforts to convince the governments that the situation has not changed, that one must fight against the Iranian bomb, whether it exists or not. But tell that to the Russians and the Chinese! The world’s governments are happy to see the end of Bush’s pressure - all except that happy couple, Nicolas Sarkozy and Angela Merkel, the new White House poodles now Tony Blair has gone.....

Either way, one thing is certain: that son of a bitch, Ahmadinejad, has screwed us again.
He has stolen our most precious possession: the Iranian Atomic Threat."
Posted by Tony at 7:34 AM