Abbas tells Ahmadinejad to bury his head in sand 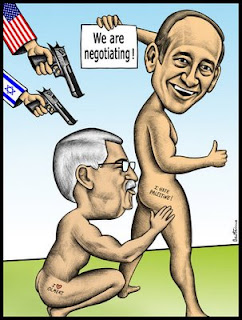 "Nobody gave Ahmadinejad the authorization to make statements on behalf of the Palestinian people," Abbas said in an interview with the RAI Italian TV.

"We recognize the state of Israel, we do not seek its destruction, and we want to establish our state next to Israel," he went on to say.

President Ahmadinejad, an outspoken critic of Israeli crimes against Palestinians in the Gaza Strip, has been accused of harboring ill intentions against Israel.....

Ahmadinejad intensified his criticism of Israel after Tel Aviv embarked on an all-out war with the Gaza Strip on December 27 and committed war crimes while killing nearly 1,350 Palestinians in the densely-populated coastal strip.

At the event, Ahmadinejad criticized the Zionist quest for a pure Jewish state in native Palestinian lands as equivalent to 'racism'.......

Abbas, whose term as PA chief has ended, added that the Palestinians set no preconditions for the resumption of peace talks......."
Posted by Tony at 6:02 AM