The West awaits the return of friendly 'democrats' to Lebanon 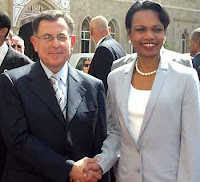 "I went to take a look at Madeleine Albright the other day. She turned up in Beirut as part leader of the National Democratic Institute, one of those Washington gigs that checks up on the freedom of elections in dodgy countries....

But I wanted to see the woman who in 1996, when asked by CBS News if the price of half-a-million dead Iraqi children was worth the sanctions against Saddam Hussein, infamously replied: "We think the price is worth it." She was US ambassador to the United Nations at the time.....

Nevertheless, the Hizbollah issue won't go away any more than Hamas is going to slide out of sight in Gaza. Barack Obama might not be too worried if it does slip into power – since his envoys are clocking up frequent flyer miles to and from Damascus, they might be in a better position to influence the Hizbollah's Syrian allies.

But don't be too sure. One of the big mistakes of the Bush era was to demand democracy for the Palestinians and to approve of fair elections before realising that Hamas would win. And once the Palestinians had achieved that astonishing result, they had to be punished for it. (It was, I recall, the Ottawa Citizen which announced that the Palestinians should be "threatened with fresh elections".)

But most of my Lebanese colleagues, listening to Mrs Albright, came away with a deep suspicion: that if the Lebanese elections bring the friendly "democrats" back to power, the National Democratic Institute and its other poll-sniffers will announce a fair and free election. But if the Hizbollah and their allies move into power, it will suddenly be discovered that the Lebanese poll was "deeply flawed". And then, I suppose, we would all be "threatened with fresh elections". The price, I am sure, will be worth it."
Posted by Tony at 7:15 AM