Who killed 120 civilians? The US says it's not a story 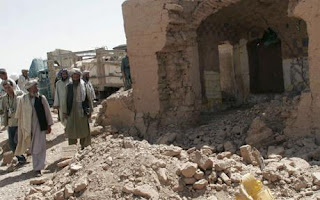 Letter from Herat: Whatever the truth about the latest Afghan atrocity, in Bala Baluk, it will be slow to emerge

By Patrick Cockburn
The Independent

".....I did not meet survivors but I did talk to a reliable witness, a radio reporter called Farooq Faizy, who had gone to Bala Baluk soon after the attack happened. He said that police and soldiers nearby were frightened of the Taliban and told him it was too dangerous to go on, but he spoke to some village elders, telling them: "Talk to us and we will tell the world." He says he was none too sure who was in control of the three villages – Gerani, Gangabad and Khoujaha – that had been hit and he was careful about what he said. But he did take some 70 or 80 photographs and they bore out the villagers' story: there were craters everywhere; the villages had been plastered with bombs; bodies had been torn to shreds by the blasts; there were mass graves; there were no signs of damage from bullets, rockets or grenades.

I suspected that the US military's claim that the Taliban had run through the village hurling grenades, supposedly because they had not been paid their cut of profits from the opium poppy crop, was just a delaying tactic. Usually the US military delays admission of guilt until a story has gone cold and the media is no longer interested. "First say 'no story'," runs an old PR adage, "and then say 'old story'." By the end of the week the US was admitting that the grenade-throwing Taliban story was "thinly sourced".

Another thesis was that fighting had taken place 500 metres from the villages, and the Taliban had retreated through them, leading to the airstrikes. Farooq Faizy said he had seen signs of fighting in the shape of two burned-out Afghan army or police vehicles and a destroyed US Humvee, but they were seven or eight kilometres away from the site of the bombing. He had taken photographs of them showing the destroyed Afghan vehicles – Ford pick-ups with a machine gun mount over the bonnet. It seemed likely that this was the fight that had led to the Afghan army and their US advisers asking for air support. What the Americans never explain in Afghanistan or Iraq is why they are using weapons designed for world war three against villages that have not left the Middle Ages – which makes heavy civilian casualties inevitable........"
Posted by Tony at 5:19 AM