Becoming What We Seek to Destroy 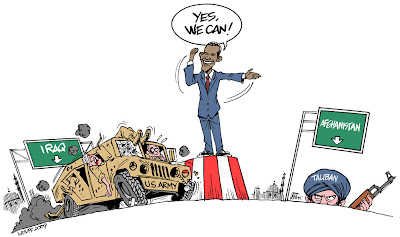 "The bodies of dozens, perhaps well over a hundred, women, children and men, their corpses blown into bits of human flesh by iron fragmentation bombs dropped by U.S. warplanes in a village in the western province of Farah, illustrates the futility of the Afghan war. We are not delivering democracy or liberation or development. We are delivering massive, sophisticated forms of industrial slaughter. And because we have employed the blunt and horrible instrument of war in a land we know little about and are incapable of reading, we embody the barbarism we claim to be seeking to defeat.....

We are faced with two stark choices. We can withdraw and open negotiations with the Taliban or continue to expand the war until we are driven out. The corrupt and unpopular regimes of Hamid Karzai in Afghanistan and Asif Ali Zardari are impotent allies. The longer they remain tethered to the United States, the weaker they become. And the weaker they become, the louder become the calls for intervention in Pakistan. During the war in Vietnam, we invaded Cambodia to bring stability to the region and cut off rebel sanctuaries and supply routes. This tactic only empowered the Khmer Rouge. We seem poised, in much the same way, to do the same for radical Islamists in Afghanistan and Pakistan......"
Posted by Tony at 6:30 AM