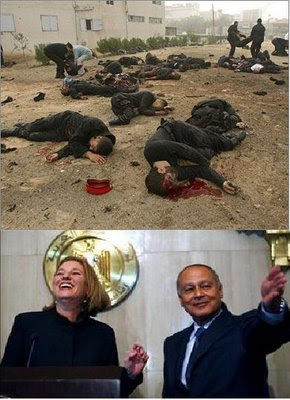 ".....Much of the debate prior to choosing Egypt likely revolved around its atrocious human rights record under President Hosni Mubarak. Since the assassination of his predecessor President Anwar Sadat in 1981, Mubarak has ruled under the provisions of Emergency Law. These statutes allow for the indefinite detention of any citizen without charge or trial, prohibit public gatherings and demonstrations, permit media censorship, and place numerous restrictions on freedom of expression.

Emergency Law has been used by the Mubarak regime, of course, to suppress any political opposition or dissent, whether from organized groups such as the Muslim Brotherhood, or from individuals like human rights activist Saad Eddin Ibrahim, presidential electoral challenger Ayman Nour, or pro-Palestinian bloggers (including Philip Rizk and Diaa Eddin Gad among others)......

What should have given Obama pause is not Egypt’s lack of civil liberties, but rather Mubarak’s utter complicity in the 2008-2009 Israeli assault on Gaza and how this will be perceived in the Muslim world.

Mubarak’s decision to keep the critical Rafah border crossing with Gaza closed, thus preventing the vital transfer of humanitarian supplies into the territory and the sick, wounded and starving out, was widely condemned throughout the Middle East (if not by the pro-U.S. governments in the region).

The impact of the cruel, callous and inhumane posture adopted by the Egyptian government in abetting the 18-month siege and subsequent 22-day offensive on the Arab psyche should not be discounted. This war led to more than 1,400 deaths – the vast majority of whom were civilians and 300 of them children – and 5,300 injured. It saw the use of white phosphorus against the innocent, wanton destruction of civilian infrastructure and deliberate targeting of United Nations relief facilities......"
Posted by Tony at 4:43 AM