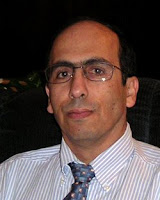 "Mazin Qumsiyeh is a tireless activist for Palestinian human rights who returned to his hometown of Beit Sahour in the Israeli-occupied West Bank last year and now teaches at Bethlehem and Birzeit Universities. The author of Sharing the Land of Canaan: Human Rights and the Israeli-Palestinian Struggle (2004), Qumsiyeh is both a human rights activist and a scientist who has a lengthy list of publications on genetics to his credit. The Electronic Intifada contributor Ida Audeh met with him in April and discussed advocating the Palestinian cause in the United States and his impressions about the current direction of the Palestinian struggle.

During the 29 years he lived in the United States, Qumsiyeh earned masters and doctoral degrees; taught at several prestigious universities, including Duke and Yale; co-founded activist organizations (Al-Awda, the Palestinian Right to Return Coalition and the Wheels of Justice Tour -- a traveling tour bus that stops at different communities to educate them about Palestine and Iraq)......

IA: Why are you optimistic?

MQ:.......Every day in Palestine, I witness hundreds of instances of brilliant actions. [Besides] the usual forms of resistance, even breathing the air here, having a married life or going to school are all forms of resistance, because we are not wanted in our own land. I find that ingenuity in resistance, the ability to persevere -- what we call sumud -- to be tremendously inspiring. Our people are able to continue their lives despite the incredible odds arrayed against them and not only to persist but also to find some measure of success. As the graffiti on the wall says, to live is to resist."
Posted by Tony at 6:29 AM