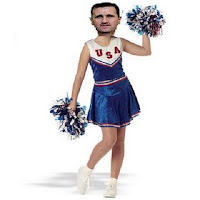 COMMENT: The author is close to the Syrian regime and the views he expresses give us an idea about the bankruptcy of that regime and the hopes it still hangs on Obama and his "magic."

"The renewal of United States sanctions on Syria comes as no surprise to Damascus, which realizes that undoing former president George W Bush's handiwork is no easy feat. Syria is instead setting its sights on the Middle East peace process, though it stresses the return of the Golan Heights by Israel remains non-negotiable....."
Posted by Tony at 6:43 AM