The Writing on the Wall for Obama’s ‘Af-Pak’ Vietnam 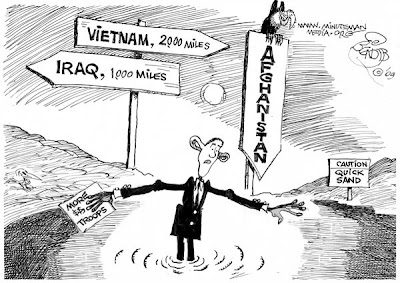 By Tony Karon
(Cartoon by Khalil Bendib)
"There was something almost painful about watching President Barack Obama last week reprising a track from his predecessor’s Greatest Hits when he hosted the leaders of Pakistan and Afghanistan. Just like Bush, Obama invited us to suspend well-grounded disbelief and imagine that Hamid Karzai and Asif Ali Zardari have the intent, much less the capability, to wage a successful war against the Taliban. Then again, there had been something painful even earlier about watching Obama proclaim Afghanistan as “the right war” and expanding the U.S. footprint there, reprising the Soviet experience of maintaining an islet of modernity in the capital while the countryside burns.

It requires a spectacular leap of faith in a kind of superheroic American exceptionalism to imagine that the invasion of Afghanistan that occurred in November 2001 will end any differently from any previous invasion of that country. And it takes an elaborate exercise in self-delusion to avoid recognizing that the Taliban crisis in Pakistan is an effect of the war in Afghanistan, rather than a cause — and that Pakistan’s turmoil is unlikely to end before the U.S. winds down its campaign next door......"
Posted by Tony at 6:44 AM