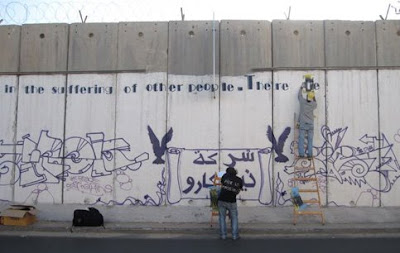 Farid Esack's letter to the Palestinian people is spray-painted on Israel's wall in the Jerusalem area.

(Farid Esack is a writer, scholar and human rights activist, well-known for his opposition to apartheid and his appoinment by Nelson Mandela as a gender equity commissioner. He has taught at many universities, including Harvard University and Xavier University in the US, the University of the Western Cape in South Africa and Vrije Universiteit in Amsterdam. At the request of Sendamessage.nl, Esack wrote this open letter that has been sprayed entirely on the wall in Palestine.)

"....I have come to your land and I have recognized shades of my own. My land was once one where some people imagined that they could build their security on the insecurity of others. They claimed that their lighter skin and European origins gave them the right to dispossess those of a darker skin who lived in the land for thousands of years. I come from a land where a group of people, the Afrikaners, were genuinely hurt by the British. The British despised them and placed many of them into concentration camps. Nearly a sixth of their population perished.

Then the Afrikaners said, "Never again!" And they meant that never again will harm come unto them with no regard to how their own humanity was tied to that of others. In their hurt they developed an understanding of being God's chosen people destined to inhabit a Promised Land.....

We continue to draw strength from the words of Nelson Mandela, the father of our nation and hero of the Palestinian people. In 1964 he was found guilty on charges of treason and faced the death penalty. He turned to the judges and said: "I have fought against white domination, and I have fought against black domination. I have cherished the ideal of a democratic and free society in which all persons live together in harmony and with equal opportunities. It is an ideal which I hope to live for and to achieve. But if need be, it is an ideal for which I am prepared to die.""
Posted by Tony at 6:09 AM