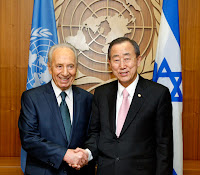 "In my last article, I considered how UN Secretary General Ban Ki-moon might handle the inquiry into Israeli attacks on UN facilities in the occupied Gaza Strip last winter. I hoped for the best but feared the worst given press reports that Ban had been told by the United States not to publish the report in full lest that harm the "peace process."
Unfortunately, the worst fears were fully justified as Ban published and sent to the Security Council only a 27-page summary of the 184-page document submitted to him by a board of inquiry led by a former head of Amnesty International.
Moreover, Ban rejected a key recommendation that there be a full independent investigation into numerous killings and injuries caused to UN personnel and Palestinian civilians during the Israeli assault.......
It is not only Palestinians who are the victims of such outrageous and immoral actions, but the last vestiges of credibility of the UN itself. I hold -- as do most Palestinians -- enormous admiration and respect for the work of UNRWA and its personnel who remained under Israeli bombardment in Gaza risking their lives along with the communities they serve. These UN personnel also deserve better; they too are betrayed by the cowardice of those above them."
Posted by Tony at 6:17 AM