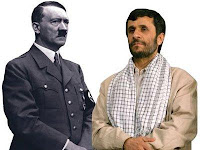 "First of all, I want to apologize to all the good women who are engaged in the world's oldest profession. I recently described Shimon Peres as a political prostitute. One of my female readers has protested vigorously. Prostitutes, she pointed out, earn their money honestly. They deliver what they promise.

Our president, on the other hand, only tells the truth by accident. He is a political impostor and a political sham. To him, too, apply Winston Churchill’s words about a former Prime Minister: “The Right Honorable gentleman sometimes stumbles upon the truth, but he always hurries on as if nothing has happened.” Or the words of former minister Amnon Rubinstein about Ariel Sharon: “He blushes when he tells the truth.”......

President Barack Obama is now saying to Israel: Put an end to the Israeli-Palestinian conflict. That is a precondition for the elimination of the threat to Israel. When the Palestinians, and the entire Arab world, make peace with Israel – Iran will not be able to exploit the conflict for the furthering of its interests. We were saying this, by the way, many years ago.

The refusal of Netanyahu-Lieberman-Barak to accept this demand shows the insincerity of their arguments about Iran. If they really believed that Iran posed an existential menace, they would hurry to dismantle the settlements, demolish the outposts and make peace. That would, after all, be a small price to pay for the elimination of an existential danger. Their refusal proves that the entire existential story is a bluff.