Readiness to Help the Empire, and Trying to Cut a Deal with The Great Satan? Back to the Future in Both Iraq and Afghanistan! 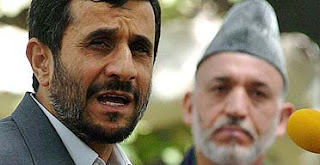 "16/05/2009 Iranian President Mahmoud Ahmadinejad will host a summit with his counterparts from Afghanistan and Pakistan in Tehran on May 19, his office said on Saturday. The Agenda of Tuesday’s talks wasn’t revealed.

The gathering comes less than three months after the three presidents met in Tehran for a regional economic summit, along with leaders from other neighboring states. The economic summit pledged to help rebuild war-shattered Afghanistan and the Gaza Strip."
Posted by Tony at 4:06 AM