The Zionist Pharaoh is Doing a Superb Job.....For Israel! 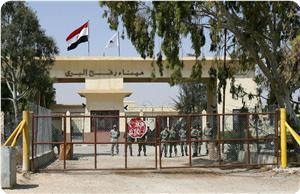 "GAZA, (PIC)-- The government committee against the siege has denounced the Egyptian authority for not allowing a British medical team to cross the Rafah terminal into the Gaza Strip.

The committee issued a statement on Sunday saying that Cairo has been blocking the British delegation from entering Gaza for five days.

It said that the team includes 12 British doctors of various origins, recalling that it is the second of its kind to be sent by the Palestine International Medical Aid (Pima Palestine).

The delegation, grouping specialists, is carrying with it necessary medical equipment needed in Gaza hospitals in addition to a number of medicines, which the first delegation said were in shortage in the Strip.

The statement said that the delegation that left Britain last Saturday was stranded at the Rafah terminal's gates despite coordinating with concerned authorities before its travel.

The committee urged the Egyptian authority to allow the team members into Gaza to offer its health and humanitarian assistance to the patients and citizens who have been trapped in the besieged Strip for three years.

It hailed, in this respect, the Turkish premier Recep Erdogan for demanding the opening of the Rafah crossing to allow necessary material to help rebuild the devastated Strip........."
Posted by Tony at 4:02 AM