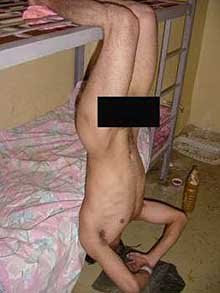 Graphic photographs of alleged prisoner abuse, thought to be among up to 2,000 images Barack Obama is trying to prevent from being released, emerged yesterday.

"The shocking images of inmates in Iraq and Afghanistan were published just a day after the US president announced plans for a legal battle stop them ever being seen.

They risked provoking renewed hostility in the Middle East as Mr Obama attempts to build bridges with the Islamic world......"
Posted by Tony at 9:13 AM