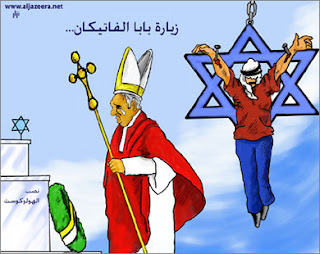 ".....Before he arrived in the region, the Pope declared that he was coming as a “pilgrim of peace”, with his staff accentuating that his role would be spiritual rather than political.

In truth, however, Pope Benedict’s visit was mired in politics the moment he agreed, at the invitation of Shimon Peres, the Israeli president, to step into this conflict-torn region.....

As the Latin patriarch of Jerusalem, Fouad Twal, recently complained: “At the roadblocks, even priestly garb doesn’t help.”

And finally, the Vatican has been seeking Israel’s agreement for more than a decade to return to its control major sites of pilgrimage, including Mount Tabor and the Basilica of the Annunciation in Nazareth.

But Israel could not control the message completely. On his one-day trip to Bethlehem and the Aida refugee camp yesterday, the Pope did acknowledge Palestinian suffering and the destruction of Gaza, even if he blamed it vaguely on “the turmoil that has afflicted this land for decades”.

He lamented the difficulties Palestinians face in reaching their holy places in Jerusalem, though he appeared to justify the restrictions on Israel’s “serious security concerns”. 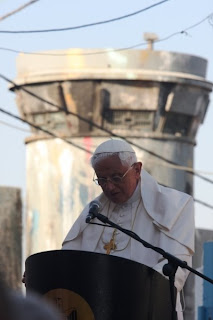 And he criticised the building of a wall around Bethlehem, while attributing its construction to the “stalemate” in relations between Israelis and Palestinians."
Posted by Tony at 6:29 AM