There We Go Again! Another Turn of the Screw for the Palestinians! More Meetings, More Summits, More Photo Ops! But S.O.S.! 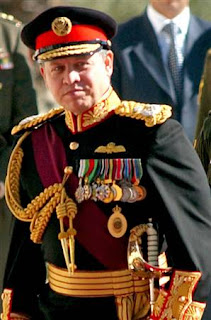 "America is putting the final touches to a hugely ambitious peace plan for the Middle East, aimed at ending more than 60 years of conflict between Israel and the Arabs, according to Jordan’s King Abdullah, who is helping to bring the parties together.

The Obama Administration is pushing for a comprehensive peace agreement that would include settling Israel’s conflict with the Palestinians and its territorial disputes with Syria and Lebanon, King Abdullah II told The Times. Failure to reach agreement at this critical juncture would draw the world into a new Middle East war next year. “If we delay our peace negotiations, then there is going to be another conflict between Arabs or Muslims and Israel in the next 12-18 months,” the King said.

Details of the plan are likely to be thrashed out in a series of diplomatic moves this month. Chief among them is President Obama’s meeting with Binyamin Netanyahu, the right-wing Israeli Prime Minister, in Washington a week today. The initiative could form the centrepiece for Mr Obama’s much-anticipated address to the Muslim world in Cairo on June 4. A peace conference could then take place involving all the parties as early as July or August. Such an ambitious project has not been attempted since 1991, when George Bush senior’s Administration assembled all the parties for a peace conference in Madrid.

but the King insisted that what was being proposed was a “57-state solution”, whereby the Arab and entire Muslim world would recognise the Jewish state as part of the deal.

“We are offering a third of the world to meet them with open arms,” said the King. “The future is not the Jordan river or the Golan Heights or the Sinai, the future is Morocco in the Atlantic and Indonesia in the Pacific. That is the prize.”

As an incentive to Israel to freeze the building of Jewish settlements in the West Bank, a key step in any peace process, Arab parties may offer incentives, such as the right for El Al, the Israeli airline, to fly over Arab air space and visas for Israeli tourists to Arab states. Mr Netanyahu told the Israeli Cabinet yesterday, however, that he had no intention of leaving the Golan Heights, which Israel seized from Syria in 1967.

Syria, which only last week was accused by Washington of being a state sponsor of terrorism, presents a huge challenge. The King, who is visiting Damascus today, insisted that the Syrians could be brought in from the cold."
Posted by Tony at 10:57 AM