Obama in Cairo is a blow to democracy 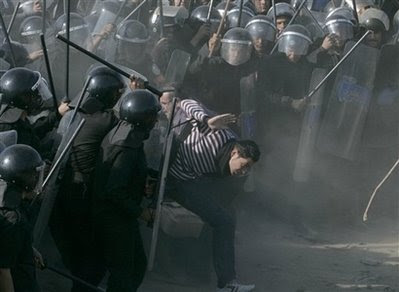 "By choosing Cairo, Egypt as the platform for his long awaited address to the global Muslim community, President Barack Obama predictably leans on a reliable dictatorship suffocating a country that is teetering toward religious and political irrelevance.....
Similarly, the near-30-year, brutal autocracy of Hosni Mubarak weighs heavily on the immobilised body of an exasperated, stifled and proud populace who've wearily observed their country, a former beacon for Arab nationalism, transformed into a loyal watchdog and stooge for anti-democratic, "pro-western" policies......
This charity flows annually despite the Egyptian government's brutal crackdown on political opposition, the free press, dissidents and even critical bloggers whose punishment runs the ignominious gamut from harassment and arrests to torture and "mysterious disappearances". For example, a Christian blogger, Hani Nazeer Aziz, turned himself in after the government's security apparatus arrested two of his brothers and used them as hostages, forcing his surrender.........
Although Obama's shameful silence on Israel's massacre in Gaza and his increasingly unsuccessful and casualty-inducing drone attacks in Pakistan have left many Muslims frustrated, his words of conciliation, dignity and respect continue to inspire optimistic Egyptians and Muslims abroad, whose only currency now is hope........."
Posted by Tony at 3:10 AM