3 Americans Held in Iran Are all Jews: Were They Spies? 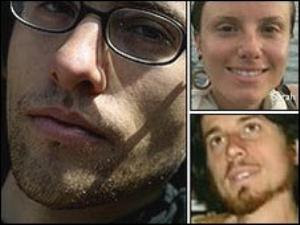 "08/08/2009 While the American media coverage and international news agencies are content to indicate that three Americans detained by Iran after crossing the Iranian Iraqi border are tourists, lost hiking in Iraqi Kurdistan, "Israel National News" website has ensured that all three are Jews and journalists as well.

Shane Bauer, Sarah Shourd and Josh Fattal were detained on the Iranian side of the border on July 31 for entering Iran illegally after allegedly hiking through the mountains from Iraq's Kurdistan region......

Josh Fattal is a researcher in the American Jewish center and works for the Jewish magazine "The Jewish Week". Sarah Shourd a writer and a contributor to New America Media, and one of Matador Pulse’s contributing writers.

Shane Bauer is the connoisseur of the region. He is a freelance journalist in several online news organizations, fluent in Arabic, and being installed in the Arab world, he covered news in Iraq and knows that country very well.

Having concealed their Judaism is doubtful and suggests they were on a mission of spying for the Israeli Mossad in particular.......

Moreover, the assertions of this journalist contradict the statements of the tourism police in the region of Iraqi Kurdistan. It shall have met the three Americans and have warned of their proximity to the Iranian border, BBC reported. "The tourism police in the region had asked them not to climb mountains because the Iranian border was very close," said Bechro Ahmad, the spokesman of the security of Iraqi Kurdistan, and concludes that "they crossed the border, despite warnings."........"
Posted by Tony at 6:43 AM