"Breaking the Silence" or silencing the critics? 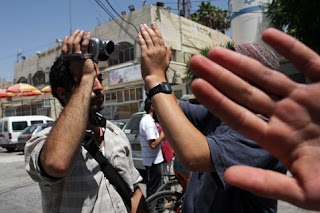 (left: Settlers in Hebron harass a cameraman from a Breaking the Silence tour of Israeli settlements in the occupied West Bank, June 2008.)

""Breaking the Silence" is a member of the Israeli human rights, peace and social justice community. The group's only crime, so it seems, lies in its effort to offer an alternative ethical voice in a society that is arguably losing its way. Breaking the Silence provides a platform for soldiers to testify to acts of violence and other violations of Palestinian rights that they may have witnessed or taken part in during their service in the Occupied Palestinian Territory. The group's most recent report details soldier testimonies that raised serious concerns about Israeli military behavior during the war on Gaza, "Operation Cast Lead." The publication is unique but it is only one example of many public statements, reports and legal advocacy in response to the prosecution of the war, which Israel consistently maintains was both moral and legal. Why then is the Israeli government waging a battle against this organization, trying to thwart its funding and, essentially, to shut it down?........"
Posted by Tony at 6:59 AM