"The New Equation: Tel Aviv in Response to an Attack on Dahiya" 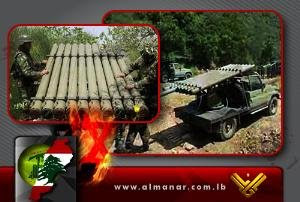 ".....The Times of London reported on Wednesday that the resistance group Hezbollah has stockpiled 40,000 rockets near the border with occupied Palestine and is training its resistance fighters to use missiles capable of striking Tel Aviv.

According to the report, resistance fighters are now being trained in the use of both long-range ground-to-ground missiles as well as anti-aircraft missiles to use against Israel.

Israel, the United Nations and Hezbollah itself have all said that the resistance group is stronger today than it was during the Second Lebanon War in 2006.

While the northern front has been relatively quiet since the 2006 conflict, Deputy GOC Northern Command Alon Friedman told The Times that the peace could "explode at any minute."

This report comes a day after Israeli defense minister Ehud Barak warned that its government considers the Lebanese government responsible for any deterioration of the security situation along the northern border.

Last month, Hezbollah Secretary General Hassan Nasrallah said his resistance group will not hesitate to attack Tel Aviv should Israel strike the movement's stronghold in Beirut in the Southern Suburb.

Speaking at a closed-door session, Sayyed Nasrallah warned that "the equation had changed" in its method of resistance against Israel and threatened to attack Tel Aviv should the Israeli army bomb the southern suburbs of Beirut, as it did during the 2006 war......"

".....Hezbollah’s rearming is in the name of resistance against Israel. The real reason, however, probably has more to do with its ally Iran. If Israel carries out its threat to attack Iran’s nuclear facilities, the main retaliation is likely to come from Hezbollah in Lebanon.....

.....Israel said that Hezbollah’s acquisition of advanced anti-aircraft missiles could prompt a military response to destroy the systems. Israeli warnings relayed to Syria appear to have forestalled the entry of the SA8 system into Lebanon, the sources said.....

Hezbollah officials refused to provide details on its military build-up but they did not deny that they were prepared for another war.

“Hezbollah today is in a better condition than it was in July 2006,” said Sheikh Naim Qassem, Hezbollah’s deputy leader, in an interview with The Times. “And if the Israelis think they will cause more damage against us, they know that we also can inflict more damage on them.”"
Posted by Tony at 9:50 AM