The Return of the Bomb 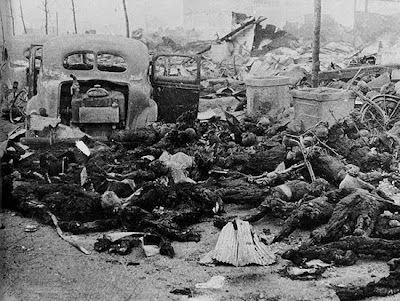 Hiroshima and Nagasaki: Just the beginning …?

"......"Today, a poll by Quinnipiac University found that 61% of Americans felt the attack was "the right thing" while only 22% believe it was wrong. Somewhat encouraging, however, was that the willingness to question the attack was significantly larger among younger people, with people between the ages of 18-34 split roughly down the middle about whether the killings were acceptable."
Whether Americans are moral monsters, inured to the horror of mass murder on an unimaginable scale, or just garden variety ignoramuses – the article goes on to note "In the US, it is still common for school children to be taught that the nuclear attack saved millions of lives" – is a question I’d rather not confront today, having answered it before to decidedly mixed reactions. ........

No, Lieberman’s finger is not yet on the nuclear trigger, but I wouldn’t rule it out in the future – the near future. And if the US persists in avoiding a confrontation with Iran, or in drawing out the "negotiating" process beyond the limits of tolerability as defined by Tel Aviv, the possibility that the Israelis will act, and trump Truman’s war crimes, cannot be credibly denied.

If they ever did go ahead and drop the bomb on Tehran, whatever blowback they had to endure could be written off as the inevitable price of survival – and the price, as I’ve said, isn’t likely to be very high. I doubt whether even this gross act of mass murder would provoke Washington to do very much more than express outrage – without, however, cutting off so much as a dime of the billions in aid we ship to Israel every year. The "special relationship," you can rest assured, would endure – and, soon enough, we’d be hearing the same sort of rationalization we are now hearing on the anniversary of Truman’s crime against humanity. It was necessary to bring the Iranians to heel, Israel had no choice, it was kill or be killed – failure to act on the Israelis’ part would have amounted to committing national suicide. I can hear it now......."
Posted by Tony at 3:39 AM