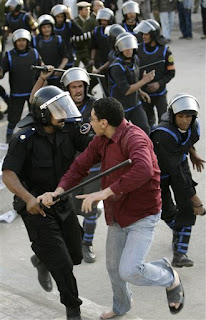 "CAIRO, Aug 4 (IPS) - The Egyptian government is now accusing the Muslim Brotherhood of links to Palestinian resistance groups and of establishing "global networks". Recent months have seen a host of government accusations - which critics say are fabricated - against opposition groups it claims have ties with Hamas, Hizbullah, and the ever-elusive Al-Qaeda.......

Over the course of the three-week assault from December 2008 into January this year, Egypt kept its border with the Hamas-run territory tightly sealed, effectively preventing the delivery of desperately needed humanitarian aid. According to critics, the decision amounted to tacit support for Israel's war on Hamas.

"All the Brotherhood leaders that had been vocal critics of Egypt's closed- border policy at the time have since been arrested or charged," Mansour told IPS. "Those arrested had also been active in organising humanitarian aid donations to Gaza's besieged population during and after the assault."......"
Posted by Tony at 5:59 AM