Interview: What now for Fatah? 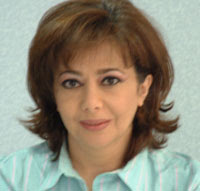 "Lamis Andoni is an analyst and commentator on Middle East and Palestinian affairs. She has been writing about the Palestine Liberation Organisation (PLO) for the past 20 years and has interviewed all of the key leaders of the movement.

As more than 2,000 delegates gather in the West Bank city of Bethlehem for Fatah's first congress in 20 years, she says the movement, which has been plagued by infighting and allegations of corruption, is at a critical juncture in its history.

To restore its lost credibility and regain its historical status as the "backbone of the PLO", she says Fatah must now disengage from the Palestinian Authority (PA) and return to its political roots......

Q: How have the accusations by Farouk Kaddoumi, a PLO official, that Mahmoud Abbas, the Palestinian president, and Mohammed Dahlan, the former Palestinian security adviser, were complicit in Arafat's death affected Fatah?

A: Kaddoumi's accusations are both an indication of the deep splits within Fatah and a reflection of how the Oslo process has shaken the movement's nationalist image even within its own rank and file......

Q: How can Fatah restore its credibility and remain regionally and internationally relevant?

A: More so than ever in its history, Fatah is facing a real rival that has popular legitimacy and backing by key regional powers.

Iran and Syria are seeking to further boost their negotiating credentials by supporting Hamas and are ready to accelerate the demise of both Fatah and the PLO.......

Q: To what extent is Hamas challenging Fatah's traditional role as the chief representative of the Palestinian people and how has Hamas been able to consolidate its position and popularity as Fatah's has gone into demise?

A: Hamas' legitimacy is derived from its opposition to the Oslo accords, its 2006 election victory and the Israeli siege and war on Gaza. Through these it has gained more nationalist credentials, making it a real rival to Fatah.

As a rival movement it stands to gain from Fatah's demise but if you consider the broader interests of the Palestinian national movement, Hamas will eventually be weakened if Fatah splinters. It will make it an easier target for Israel and Hamas will realise that it cannot continue the struggle alone.

The tragedy is that they are both engaged in a deadly power struggle supported by regional and international powers that are more interested in making the two parties totally submit rather than in supporting a movement that genuinely seeks Palestinian rights........"
Posted by Tony at 3:24 AM