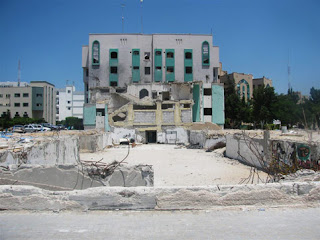 "More than six months after Israel's winter invasion of Gaza, a number of partially or largely damaged universities await reconstruction. Raw materials essential for rebuilding are unavailable in Gaza primarily because of Israel's 26-month blockade of the tiny territory. Coupled with the wide-scale destruction from Israel's 22-day onslaught, the siege has crippled most aspects of public life for Gaza's 1.5 million residents.

Dr. Kamalin Shaath, President of the Islamic University, explained that "The buildings are still demolished, all we did was remove the rubble. We are looking forward to beginning the reconstruction."
.....

In addition to the universities, an American school in northern Gaza was totally destroyed by Israel. Moreover, several schools run by the UN agency for Palestine refugees (UNRWA) across Gaza were damaged by Israeli shelling. As the new academic year approaches, the third under Israel's siege, Gaza's universities and schools remain in desperate need of reconstruction."
Posted by Tony at 6:10 AM