Change We Can Believe in? Oh.......Yeah.Obama Pentagon Plans Speeding Up 'Bunker Buster' Bomb 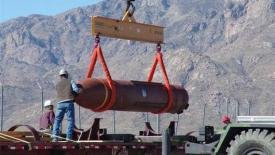 "WASHINGTON - The US military said on Monday it wants to speed up production plans for an enormous "bunker buster" bomb, amid international concern over underground nuclear sites in Iran and North Korea......

The MOP, believed capable of blasting through 200 feet (60 meters) of reinforced concrete, is seen as a potential weapon against nuclear facilities in Iran and North Korea that are mostly buried underground......."
Posted by Tony at 8:53 AM