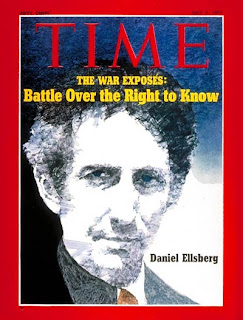 "Editor’s Note: Sixty-four years ago, the United States dropped an atomic bomb on the Japanese city of Hiroshima, killing about 70,000 on that day (with a similar number dying from the bomb’s effects by the end of 1945).

While the attack sped the Japanese surrender, it also ushered in a new age of total warfare that has cast a shadow over the future of mankind, as Daniel Ellsberg notes in this personal remembrance, which is the start of a nuclear memoir that the famed Pentagon Papers whistleblower plans to publish in segments.......

I have believed for a long time that official secrecy and deceptions about our nuclear weapons posture and policies and their possible consequences have threatened the survival of the human species.

To understand the urgency of radical changes in our nuclear policies that may truly move the world toward abolition of nuclear weapons, we need a new understanding of the real history of the nuclear age.

Using the new opportunities offered by the Internet — drawing attention to newly declassified documents and to some realities still concealed — I plan over the next year, before the 65th anniversary of Hiroshima, to do my part in unveiling this hidden history. "
Posted by Tony at 4:01 AM