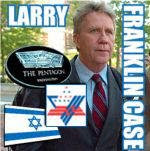 Larry Franklin revises history – his own

"The AIPAC spy scandal was a big setback for Israel’s lobby in the U.S., despite its ambiguous outcome. Yes, the espionage charges against AIPAC officials Steve Rosen and Keith Weissman were eventually dropped – after every effort to obstruct justice and "graymail" the government was made on the defendants’ behalf – yet just the fact that Israel’s spy ring in Washington was indicted and exposed to public view was and is a major setback for them, and they aren’t about to let it go.
After all, the most powerful lobby in Washington had its offices raided by the FBI not once, but twice, and its name was dragged through a years-long and quite drawn-out process during which the mask began to slip and the true face of AIPAC – as an agent of a foreign government – was there for all to see. Not only that, but the true face of that government as not necessarily a friendly one – indeed, in this instance, as an adversary of the U.S. – was revealed......."
Posted by Tony at 4:04 AM