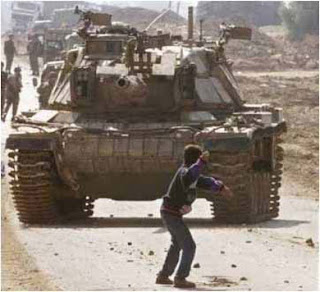 "I recently returned from the Holy Land after leading about 40 Presbyterians from Galilee to Jerusalem. This isn't new territory for me. I've been in the country many times leading students, working at archaeology digs, speaking at conferences, and occasionally taking a church such as this. And this time what I saw and heard was worrying......

One day I happened to be standing at the great Western Wall where so many Jews pray. And as I stood, a young man handed me a flyer from the conservative Chabad-Lubavitch foundation. Many men were reading it and so I joined them. A lead essay described a strategy for how Israel can "settle the entire land." And the outline stunned me. "Do not announce to the gentiles what you are doing." "Do it quietly without noise or publicity." The essay fleshed out these aims and my mind went immediately back to Jabal Mukabber and the countless villages like them. They were being destroyed quietly.

After my tour group departed for home, I remained in Jerusalem and talked to some of my Palestinian Christian friends, asking, so what is going to happen? Their answer was telling. There will be another uprising. It is inevitable. But then I asked if it would work, since the previous uprising in 2000 failed. The despair that followed was disarming......"
Posted by Tony at 6:26 AM