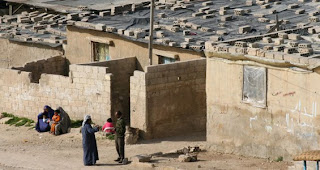 "As Fatah convenes its long-awaited sixth general conference in Bethlehem, some Palestinian refugees in Jordan say they are not expecting anything positive to emerge from the movement that once represented them.

Fatah was originally established by Yasser Arafat, the late Palestinian president, with a charter that called for armed struggle against Israel.

But decades later, many refugees believe that the movement's original mandate has been distorted by Western and Israeli pressure to transform it into a 'peace partner'.

Many say that a series of concessions have led to a drop in the movement's popularity in the camps and some I spoke with said they were not at all interested in the conference.

They believe the Palestinian Authority (PA) had long ago sidestepped its responsibilities and that Fatah will likely not address issues related to refugees at the Bethlehem meeting......

Other refugees in the alleyways which criss-cross the al-Baqaa camp say they have no confidence that their voices are being heard by Mahmoud Abbas, the Fatah leader and Palestinian president.

Jordan's Palestinian refugee camps used to be a stronghold for Fatah fighters but that mood has changed......

Shaker al-Jawhari, the editor-in-chief of the al-Mustaqbal Arabic electronic newspaper and a former Fatah member, says that frustrated Palestinians will soon start to take matters into their own hands.

"Compromising on the Palestinian people's right to resistance is exactly what will ignite a new resistance revolution, especially at a time when the Israeli community is witnessing more radicalism and refusing to give Palestinians any rights.".....

As the delegates meet in the West Bank many refugees who still live in temporary camps some 44 years after Fatah was created and 20 years after it last convened, are left wondering just what Fatah has done for them."
Posted by Tony at 4:07 PM