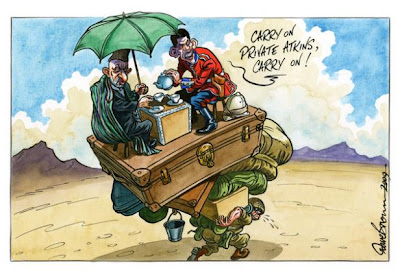 Is it possible? The Brits seems to think so

"In Britain, they’re getting antsy about Obama’s war – the "Af-Pak" [.pdf] war, that is. Without the poodle Tony Blair to cover for us, Britain’s ruling Labor Party – decisively smacked down in the recent elections to the European parliament – is grumbling about being stampeded by the United States into fighting another unpopular war. The House of Commons Foreign Affairs committee is complaining that the joint U.S.-NATO mission in Afghanistan is degenerating into a strategic disaster – or, as they put it, has become "considerably more difficult than might otherwise have been the case" – and it’s all our fault.
That may very well be true, but one has to ask: faced with an essentially impossible task like subduing the Afghans, under what circumstances would the effort have been any less difficult?
Well, the Brits have a few suggestions to make. They, after all, are experts at the business of empire, having had so much more experience than their American cousins, and they are full of advice. The problem, you see, is "the lack of a realistic strategy."
How enlightening! What the House of Commons would consider "realistic," however, is rather a mystery. We need only look at the Brits’ experience in Afghanistan – and the Russians‘, and others’ going all the way back to the Parthians and Alexander the Great – to realize the only realistic strategy would be to get out while the going is good......"
Posted by Tony at 3:51 AM