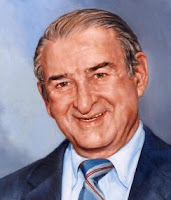 "......One of Moskowitz's favourite charities, to which he has given at least $5m, is American Friends of Ateret Cohanim, which runs a prominent East Jerusalem yeshiva. More importantly, its mission calls for rebuilding the Holy Temple and re-instituting animal sacrifices from the time of King David. The yeshiva trains those who would become priests if such a temple were ever built. If any of this came to fruition, it would likely ignite a holy war between Jews and Muslims.

I have urged the IRS to revoke the non-profit status of these entities. By granting tax-exempt status to the groups and their donations, the US taxpayer becomes an indirect subsidiser of the occupation. Denying non-profit status would strike a major blow against the American Jewish funding pipeline, which advances the most noxious projects of the extremist settler movement......."
Posted by Tony at 3:22 AM