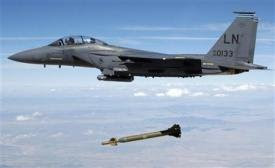 "WASHINGTON - The Pentagon is seeking to speed deployment of an ultra-large "bunker-buster" bomb on the most advanced U.S. bomber as soon as July 2010, the Air Force said on Sunday, amid concerns over perceived nuclear threats from North Korea and Iran.

The non-nuclear, 30,000-pound Massive Ordnance Penetrator, or MOP, which is still being tested, is designed to destroy deeply buried bunkers beyond the reach of existing bombs........"
Posted by Tony at 8:56 AM