Sousan Hammad, The Electronic Intifada, 6 August 2009
(Sousan Hammad is a journalist based in the West Bank city of Ramallah.)

".....But if there is one thing for which Fatah can be counted on, it is exemplary power and its capacity to intimidate -- in this case with the trappings of totalitarianism as defined by the single party and the suppression of all opposition.......

....As Abbas waited for his turn to read from what seemed like an inevitable 60-page speech, a man walked around the aisles handing out cheaply-made, Fatah-branded kuffiyehs (the traditional checkered scarf) to delegates and journalists. He insisted everybody wear it for the cameras.

The spectacle proceeded with an affectedly dramatic speech by former prime minister Ahmed Qureia, who partially owns al-Quds Cement, a company that has sold cement to Israel for the construction of Israel's illegal wall in the West Bank...... 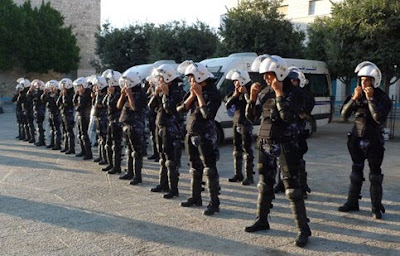 Despite Palestine's statelessness, Abbas mentioned how he has been improving security for the state. Upon hearing this, Mohamed Edwan (Head Press Officer to the PA who happened to sit beside me) shook his head and said, "This is a police state, not a state of security."

It is already difficult to see the purpose of such ceremonies, but when Abbas' very own communicator dismisses what he says as a falsehood, how can we expect Fatah's central committee, political agenda and electoral decision-making bodies to act in unison with party members....."
Posted by Tony at 8:22 PM