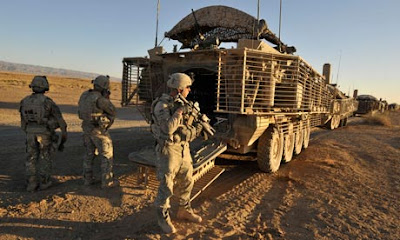 "The US military is investigating the leadership of an army brigade whose soldiers are accused of running a "kill team" that murdered Afghan civilians, as further evidence emerges of widespread complicity in the deaths.
A brigadier general is conducting a "top to bottom" review of the 5th Stryker brigade after five of its soldiers were committed for trial early next year charged with involvement in the murders of three Afghans and other alleged crimes including mutilating their bodies, and collecting fingers and skulls from corpses as trophies.
Among the issues under investigation is the failure of commanders to intervene when the alleged crimes were apparently widely spoken about among soldiers......"
Posted by Tony at 6:43 AM