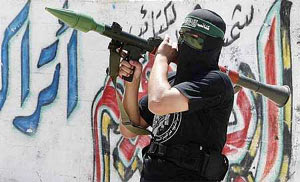 "Hamas captured the headquarters of the Fatah-allied security forces in northern Gaza on Tuesday, seizing a key prize in the bloody battle for control of Gaza.

A Fatah security official confirmed the building had been fallen, saying nine people were killed and 30 wounded.

About 200 Hamas gunmen surrounded a compound, where some 500 Fatah fighters were holed up. Hamas fired mortars and rocket-propelled grenades at the building.