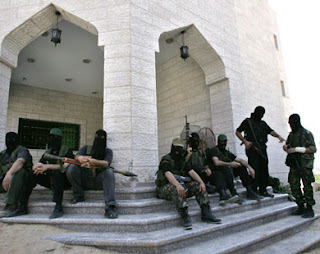 "A senior Hamas official in Syria said Thursday there would be no change in Gaza's status and no Islamic rule declared in the territory after a near takeover of the seaside strip by the militant group.

Earlier in the day, Abu Marzouk warned Fatah against carrying the fighting with Hamas from the Gaza Strip to the West Bank......This is very dangerous for our people, Abu Marzouk said by telephone in Damascus, "all wise people, especially in Fatah, should be aware of this danger and should prevent the men of (Fatah) ... from endangering the West Bank's security as they had done in Gaza Strip."

"Hamas has no intention whatsoever to shed the blood of any Palestinian. What Hamas is doing is just self-defense, he said. The battle of the Palestinians is only with the Israeli enemy."

Meanwhile, a prominent Fatah gunman who had once bragged about executing Hamas fighters and torching homes of rivals was killed in the ongoing fighting between rival factions Fatah and Hamas. The gunman, Samih Madhoun, was one of the leaders of a 1,500-strong force that had been set up several months ago as a counterweight to Hamas. Madhoun recently said in an interview on a pro-Fatah radio station that he had executed several Hamas fighters and torched the homes of others......

Hamas spokesman Sami Abu Zuhri said the Islamic group was forced to wrest control from Fatah because its security services were corrupt and generated chaos. Nothing is going to be changed in the social and cultural life of our people following the Islamic group's takeover of Gaza, Abu Zuhri insisted.

Hamas political leaders in the group's headquarters in Syria refused to comment on the group's intentions now that it has consolidated its control in the coastal strip. Abu Zuhri said Fatah fighters who surrendered their weapons would not be harmed......"
Posted by Tony at 2:04 PM