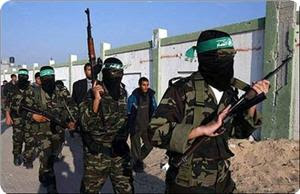 "GAZA CITY, Gaza Strip - Hundreds of Hamas fighters firing rockets and mortar shells captured the headquarters of the Fatah-allied security forces in northern Gaza on Tuesday, scoring a key victory in the bloody battle for control of the seaside strip......

Tuesday's battles marked a turning point, with Hamas moving systematically to seize Fatah positions in what some in the Islamic militant group said would be a decisive phase in the yearlong power struggle......

In one desperate attempt to boost morale, disorganized Fatah forces attacked Hamas' main TV station, but were repelled after a heavy battle.....

In Jerusalem, Israeli Prime Minister Ehud Olmert proposed stationing international forces along the Gaza Strip's border with Egypt to prevent arms from reaching Palestinian militants, including Hamas. However, he ruled out assistance to Abbas' forces.......

"Decisiveness will be in the field," said Islam Shahwan, spokesman for the Hamas military wing.

In contrast, Fatah commanders complained they were not given clear orders by Abbas to fight back and that they had no central command. Fatah's strongman in Gaza, Mohammed Dahlan, has spent the last few weeks in Cairo because of a knee injury. Other leading Fatah officials left Gaza for the West Bank after previous rounds of bloodshed.

"There's a difference between leading on the ground and leading by mobile phone," police Col. Nasser Khaldi said of Dahlan's absence. "Hamas is just taking over our positions. There are no orders."....."
Posted by Tony at 1:32 PM