The Battle of Gaza 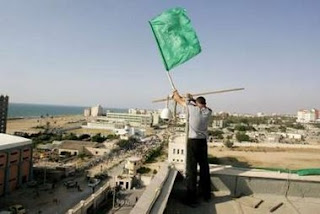 "In less than 24 hours of fierce street-fighting, Bush’s proxy-army in Gaza was routed by armed units of Hamas. It was a stunning defeat for Palestinian President Mahmoud Abbas, and for US-Israeli policymakers who have done everything in their power to overturn the "free and fair" election of the Hamas government. For now, Hamas has reestablished its authority in Gaza although Abbas is still working frantically with Bush and Olmert to consolidate his power in the West Bank. So far, Abbas has carried out the demands of his paymasters by replacing Prime Minister Ismail Haniyeh with ex-World Bank official, Salam Fayyad---a Palestinian Karzai who will take his orders from Tel Aviv or Washington. Abbas does not have the constitutional authority to replace Prime Minister Haniyeh or to disband the Hamas-dominated government, but this point is typically overlooked in the western media.

The Bush administration has abandoned any pretense of neutrality and is openly supporting the ongoing violation of UN resolution 242. Bush helped to engineer the savage boycott which has withheld food, water, medical aid and financial resources from Palestinian civilians. He has also funneled millions of dollars and weapons to the Palestinian "Preventive Security Force" headed by US-ally Mohammad Dahlan. According to the UK Guardian, "Washington has launched a controversial $60 million program to bolster Mr Abbas's presidential guard and Israel has quietly allowed Arab states to send in arms and ammunition". Dahlan’s militia was organized to challenge Hamas, but the plan failed spectacularly. As soon as the fighting broke out in Gaza, Dahlan’s men panicked and fled across the border to Egypt. Those who remained were disarmed, stripped and taken into custody by Hamas. One prominent Fatah gunman, Samih Madhoun, who had boasted of "executing several Hamas fighters and torching the homes of others", was shot execution style.

The defeat in Gaza is just the latest of Washington’s debacles in the Middle East. US-Israeli failures in the territories are the result of a misguided policy which is backfiring everywhere. Investigative journalist Seymour Hersh summed up the present policy like this: "We're in the business of creating ... sectarian violence."

Hersh is right. Bush and Olmert are using the familiar "divide and conquer" strategy to provoke "Arab on Arab" violence. The policy is an extension of Henry Kissinger’s dictum during the Iran-Iraq war: "I hope they all kill each other". The goal is the same today as it was then......

The perception of US invincibility has been shattered. America’s moral authority is in ruins. We are neither feared nor respected; that is the unfortunate legacy of Abu Ghraib and Falluja. But what is bad news for us may be good news for the people in the Middle East. It’s now possible to imagine a New Middle East where fundamental change is possible. As resistance continues to swell from a trickle to a stream---we can envision "regime change" sweeping through the region from Riyadh, to Amman to Cairo---an entirely new world shaking off its colonial past.

The forces that Bush has put in motion will inexorably lead to the decline of "superpower rule" and the dismantling of the US imperium. The transition is already visible. The battle of Gaza is just a microcosm of a much larger phenomenon which now extends from Mogadishu to Kabul.

Change is coming, but it might not be to Bush’s liking. That’s the real lesson of what happened in Gaza. "
Posted by Tony at 4:07 PM