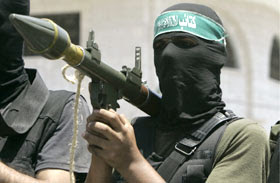 "Hamas said Thursday that it would refuse to accept a multinational force along the Gaza-Egypt border and would treat it as an occupying power.

"Hamas rejects any dispatch of foreign forces to the Gaza Strip," Hamas official Sami Abu Zuhri said. "The movement would regard those forces as occupation forces no different to the Israeli occupation, regardless of their nationality."

A multinational force in Gaza was suggested by Prime Minister Ehud Olmert and Palestinian Authority Chairman Mahmoud Abbas during separate phone conversations Tuesday with UN Secretary-General Ban Ki-moon, who in turn discussed it with the Security Council on Wednesday........

Speaking after a meeting with visiting Dutch Foreign Minister Maxime Verhagen, Olmert said that "Western countries need to act soon to alter the situation in the Gaza Strip."

Olmert suggested that the multinational force would be similar to the United Nations peacekeeping force in southern Lebanon.

Olmert is likely to raise the idea of a multinational force during his talks with President George Bush in Washington next Tuesday.

The idea of a such a force along the Philadelphi Route was proposed by the Foreign Ministry, and was presented during a meeting of the security cabinet three weeks ago, which centered on the situation in the Strip.

According to the plan the force would serve to prevent the smuggling of arms from Sinai to the Gaza Strip in coordination with an Egyptian force operating on the Egyptian side of the border......."
Posted by Tony at 4:28 AM