As Hamas Seizes Full Control of Gaza and US Prepares Further Isolation, What Next for Palestinians? 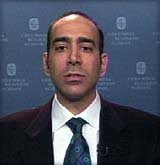 ".......AMY GOODMAN: Laila el-Haddad is a Palestinian journalist. She writes for Aljazeera.net and is making a film on Gaza's underground economy. She maintains a blog “Raising Youssef: A Diary of a Mother Under Occupation.” Laila lives in Gaza and the United States. She returned from Gaza last week, joins us in our firehouse studio. Ali Abunima is cofounder of the publication The Electronic Intifida, author of the book "one country: a bold proposal to end the Israeli-Palestinian impasse." he joins us from Chicago. And on the line from Gaza is Fares Akram, a freelance journalist in Gaza city.......
........

ALI ABUNIMAH: I wouldn't put too much stock in that because the Israeli policy of cutting Gaza off from the West Bank is longstanding. It's been for more than a decade, that Palestinians in Gaza and the West Bank can't travel from one place to the other. What I think we are seeing is the collapse of the two-state solution. Alvaro de Soto acknowledged that in his leaked confidential report. And today in the The Washington Post Edward Abington, the former US Counsel general in Jerusalem and now a lobbyist for the Palestinian authority was quoted saying that these events signal the death of the two-state solution. I think we have to recognize that the Israeli policy of trying to create Palestinian ghettos [inaudible] is failing before our very eyes. Palestinians are the majority population in Israeli-ruled territory between Jordan and the Mediterranean Sea. And it's only a matter of time before the world wakes up to this reality......."

Click Here to Watch, Listen or Read Transcript
Posted by Tony at 12:54 PM