A setback for the Bush doctrine in Gaza 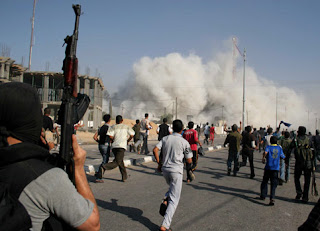 "The dramatic rout of the US and Israeli-backed Palestinian militias in Gaza by forces loyal to Hamas represents a major setback to the Bush doctrine in Palestine.....

This support has included funneling weapons and tens of millions of dollars to unaccountable militias, particularly the "Preventive Security Force" headed by Gaza warlord Mohammad Dahlan, a close ally of Israel and the United States and the Abbas-affiliated "Presidential Guard." US Deputy National Security Advisor Elliott Abrams -- who helped divert money to the Nicaraguan Contras in the 1980s and who was convicted of lying to Congress in the Iran-Contra scandal -- has spearheaded the effort to set up these Palestinian Contras......

De Soto details that Abbas advisers actively aided and abetted the Israeli-US-European Union aid cutoff and siege of the Palestinians under occupation, which led to massively increased poverty for millions of people. These advisors engaged with the United States in a "plot" to "bring about the untimely demise of the [Palestinian Authority] government led by Hamas," de Soto wrote.......

The core of US strategy in the Southwest and Central Asia, particularly Afghanistan, Iraq, Palestine, and Lebanon is to establish puppet regimes that will fight America's enemies on its behalf. This strategy seems to be failing everywhere.....

Israel's policy is a local version of the US strategy -- and it has also been tried and failed. For over two decades Israel relied on a proxy militia, the South Lebanon Army, to help it enforce the occupation of southern Lebanon. In 2000, as Israeli forces hastily withdrew, this militia collapsed just as quickly as Dahlan's forces and many of its members fled to Israel. Hamas is now referring to the rout of Dahlan's forces as a "second liberation of Gaza.".....

Once some exiled PLO leaders, most notably Yasser Arafat, became willing subcontractors of the occupation (an arrangement formalized by the Oslo Accords), a new resistance force emerged in the form of Hamas. Israeli efforts to back Dahlan and Abbas, Arafat's successor, as quisling alternatives have now backfired spectacularly......

The contrast between Abbas' action and the Hamas response is striking. Abbas, perhaps pushed by the same coterie of advisors, seems to be escalating the confrontation and doing so when there is no reason to believe he can prevail. Hamas, while standing firm and from a position of strength, spoke in a language of conciliation, emphasizing time and again that Hamas has a problem with only a small group within Fatah, not its rank and file. Abbas, Dahlan and their backers must be surveying a sobering scene -- they may be tempted to try to take on Hamas in the West Bank, but the scale of their defeat in Gaza would have to give them pause.......

Abbas, backed by Israel and the US, has called for a multinational force in Gaza. Hamas has rejected this, saying it would be viewed as an "occupying force."......The multinational force, Hamas fears, would not be there to protect Palestinians from their Israeli occupiers, but to perform the proxy role of protecting Israel's interests that Dahlan's forces are longer able to carry out and to counter the resistance -- just as the multinational force was supposed to do in Lebanon after the July 2006 war.....

Wise leaders in Israel and the United States would recognize that Hamas is not a passing phenomenon, and that they can never create puppet leaders who will be able to compete against a popular resistance movement. But there are no signs of wisdom....."
Posted by Tony at 8:21 PM